I customized my Les Paul SL again to replace the special module with the ordinal system. However, I like the rich treble of Les Paul SL. I re-plotted the work of customizing 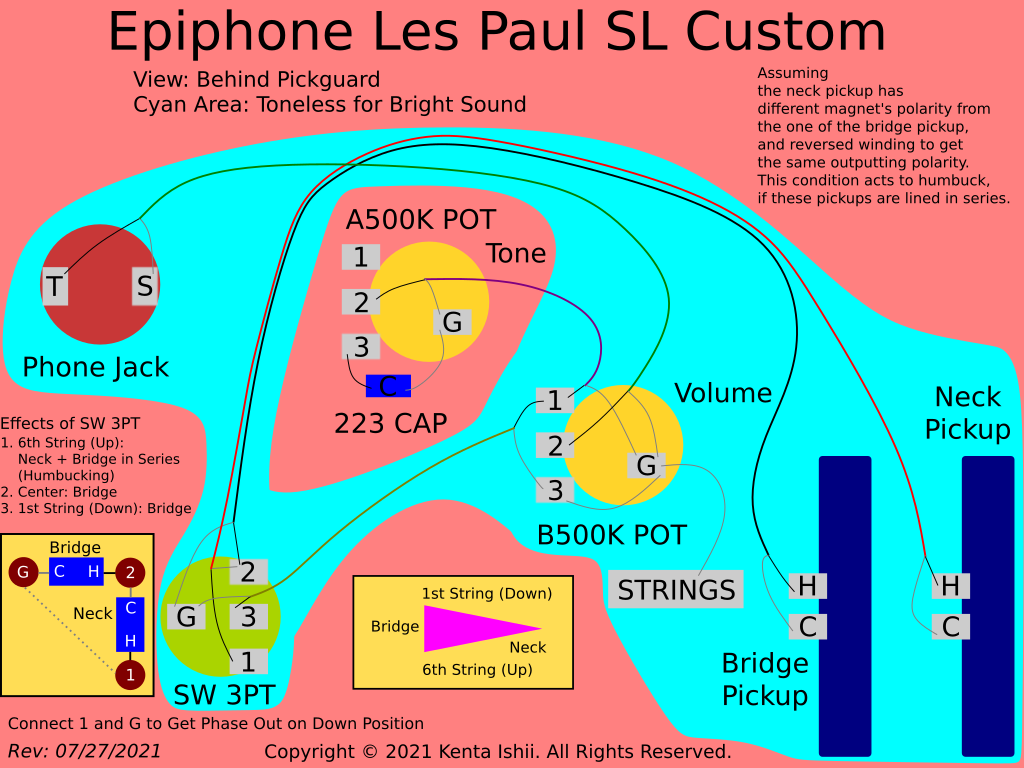 * It's on the TV_NETWORK (with STRONG_POINT) Olympics games right now. Japanese TVs are screaming to medalists because of special. We should have sense to the issue that the special isn't eternal, but the special is about to be ended. The thing with special gives freedom of all actions. For example, people felt special in Capital Hills on earlier days in January of this year, but they were condemned without any tolerance. Japanese military at that days felt special rather than civilians, and they were defeated in a terrible manner. TVs tends to want special people in special scenes to get a lot of audiences in front of monitors, but no sense about things afterwards at all. We expects「祭りの後の静けさ」 (Matsuri no Ato no Shizukesa = The Silence after A Festival), and the wind of Autumn will vanish the special that TV_NETWORK and Olympians want for a little time. I have a question whether they earned their accomplishments within the time of special except medals or not. The effect to me by the Olympics games are only curiosity how the urbanized surfing destroys the rich culture of beaches, and how sea lines become fortified. In every year, September is just hot or cold in our mind.

I omit the TONE to get treble in the new plot. I only worked things on the area of cyan color. 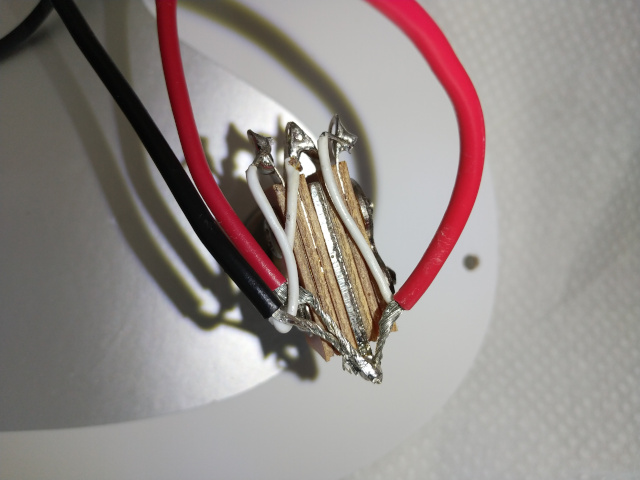 The selector with factory default. I removed red cables from the neck pickup and the output by my soldering iron, and remained the black cable from the bridge pickup.

I soldered the jack and the A500K POT in advance by lead solder using liquid flux. I pre-soldered wires and the points for soldering on the jack and the POT. To get detachable, I didn't coil wires to the jack or the POT before soldering. 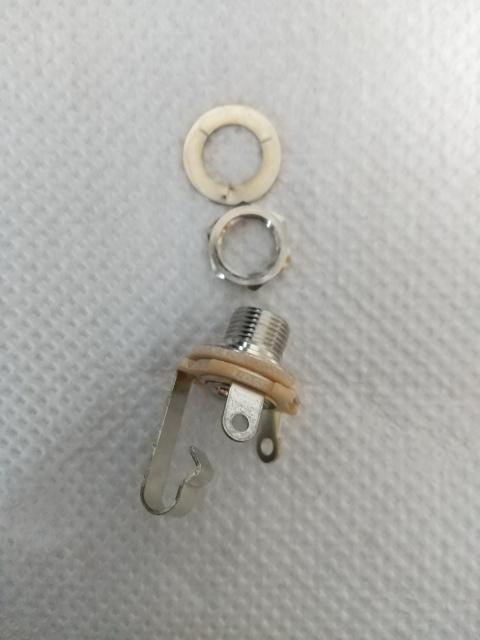 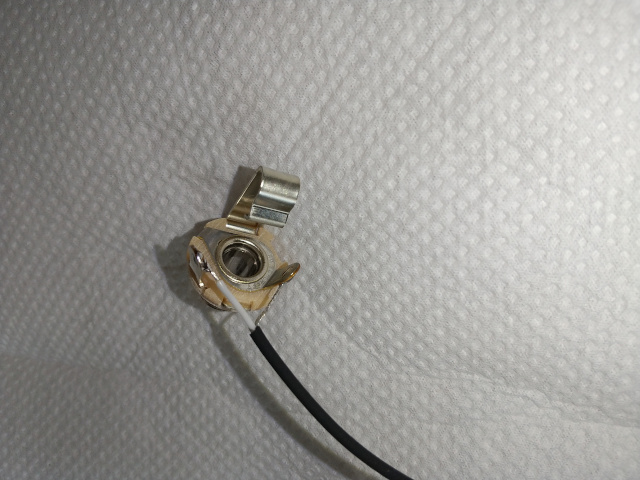 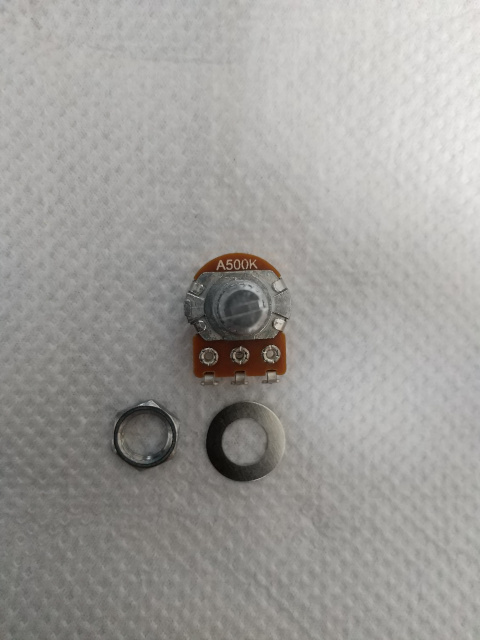 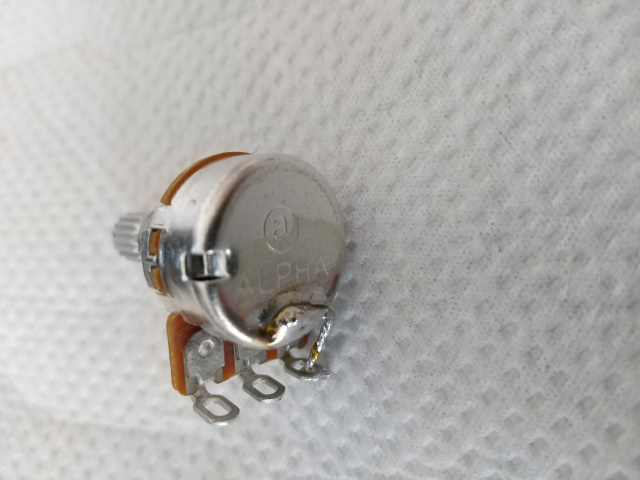 Alpha ⌀16mm A500K ohms POT distributed by SCUD: I applied twisted copper wires of the MOGAMI shielded cable to connect with No. 3 pad and the sanded point of back lid of the POT for grounding. Note that I had used some generic A500K ohms POT, but it had zero ohms at the maximum volume, i.e., a mechanical glitch. Someone may know the generic POT, but I omitted out the detail of the POT because of no subject in this post. 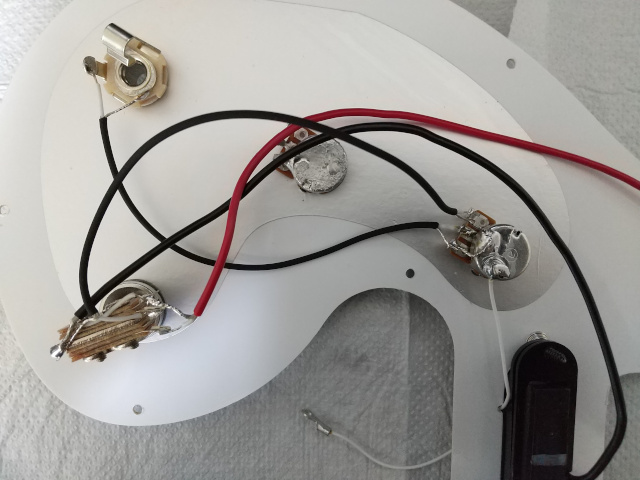 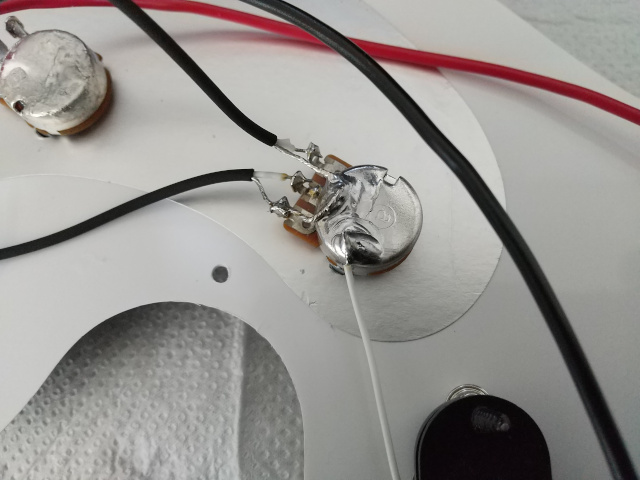 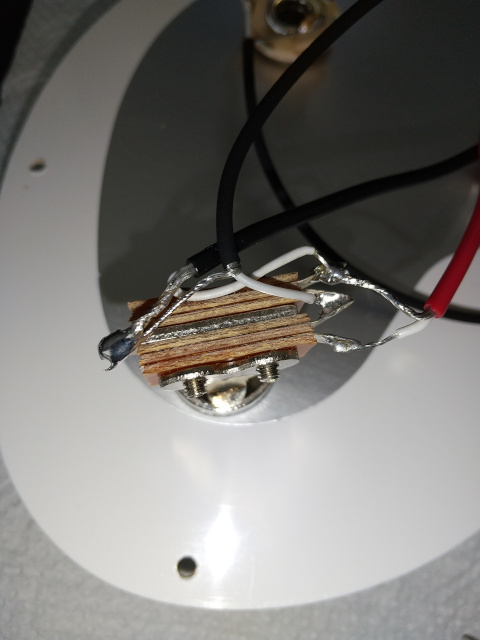 Caution that the pickguard may be melted by heat of your soldering iron. To connect parts with shielded wires, I used a small plastic box (TAKACHI SW-40B, W30mm H20mm D40mm) which have a hole to support a POT and a jack in soldering. I placed the plastic box above the hole in the pickguard to wire correctly and insulate the pickguard from heat. Note that the length of the white wire soldered on the POT for grounding to the bridge is approx. 150mm.

The sound of serial pickups is just summation of the neck pickup and the bridge pickup rather than a humbucker, i.e., the lost of middle. However, I think it's powerful on Bass and Treble. The level of noise is low enough on playing. Whereas, the bridge pickup gives the sound of single coil.