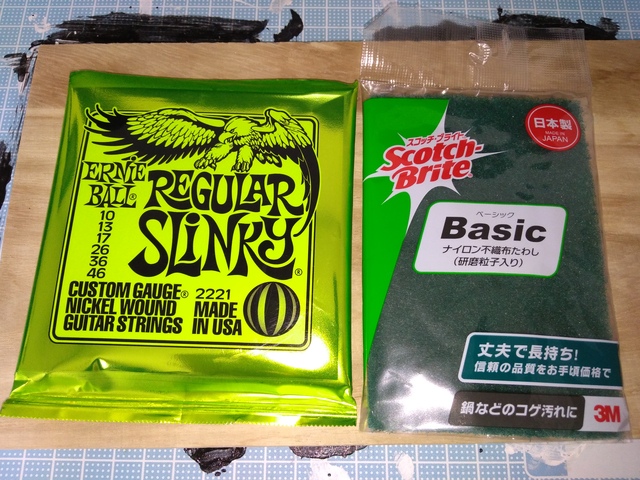 On replacing strings, I cleaned frets of my Les Paul SL by a nylon scrub pad abrasives are coated. I have no steel wool #0000 super fine, and it's amazingly expensive in Japan. I can't pay 1000 yen and over for any steel wool instead of a 110 yen scrub pad. I didn't use painter's tape to cover the fingerboard not to be scratched by the nylon pad, but you may need to tape several times if you feel anxious to possible scratching your super guitar, having a maple fingerboard. You would be better off polishing softly using the pad with your index finger because the pad is stronger than you might think. The pack of strings I chose is Ernie Ball Regular Slinky. Its tension is softer than Epiphone's genuine on the same gauges. 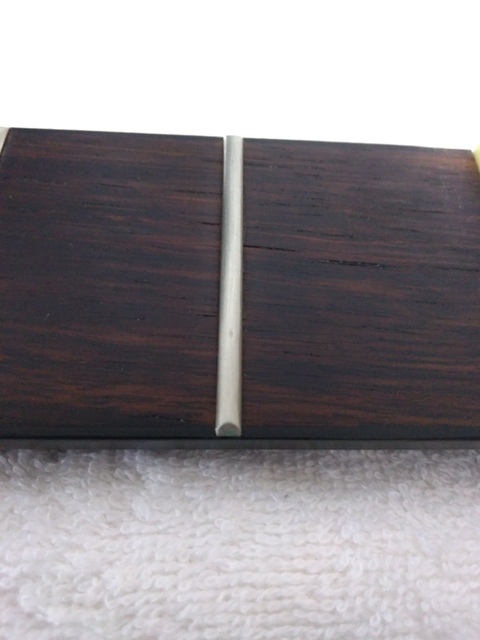 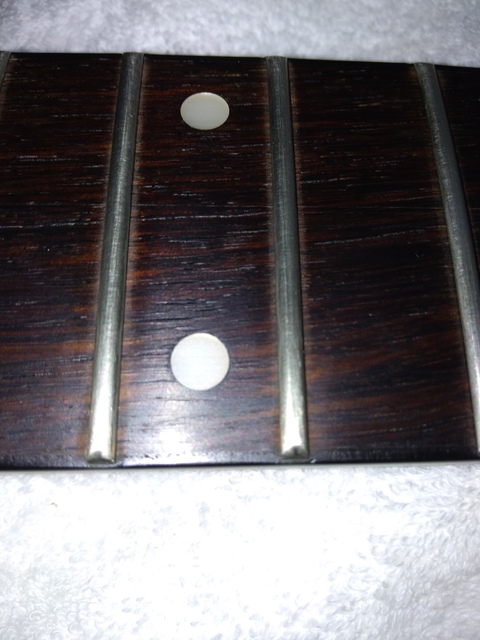 You may say "why can't you stranger use lemon or orange oil instead of such a skin care? Plus, I don't become a pot washer in Kitchen!". The answer is lemon and orange oil can possibly be oxidized, making frets rusted. Yes, in fact I had a bottle of lemon oil for an YAMAHA dreadnought, but it didn't become empty and the oil was eventually leaked in a case. Lemon odor from the case unfortunately gave me sad memory. By the way, I found a pack of Martin's strings for the dreadnought I bought over a decade ago, and these were rusted. I don't know it's caused by lemon oil or my abandon.

* Pink noise is the expression of the equal loudness in every frequencies. To mix tracks, pink noise is useful to equalize loudness on both bass sound and treble sound. However, it's so tough to use the method by your listening ability. If I have to do the work by my ability, I don't do the work. In Audacity, you can equalize loudness by several analyses. For example, you can use "Plot Spectrum". First, you make pink noise by "Noise" in "Generate" on some amplitude, and analyze this by "Plot Spectrum" and take a screen shot. Then, you analyze other tracks as well, and check the difference between the plot of pink noise and the plot of the track.

* Les Paul SL seems to be made in Qingdao where Germany and Japan colonized in the 20th century until the end of World Wars. The city is cited on Dalian Bay where a big wood market exists, having the history of making furniture, so I didn't imagine the wrong quality of the guitar on purchasing. In fact, its neck and its body have enough quality. I believe Chinese economy has been almost sustained by the industry around Dalian Bay, but not advanced electronics that is just an aggregate of technologies from foreign countries. The cost of products from advanced electronics is more unclear than furniture, and it's typically summed up over the cost you can allow. This is also the reason that technologies are disliked and go across the sea to China. 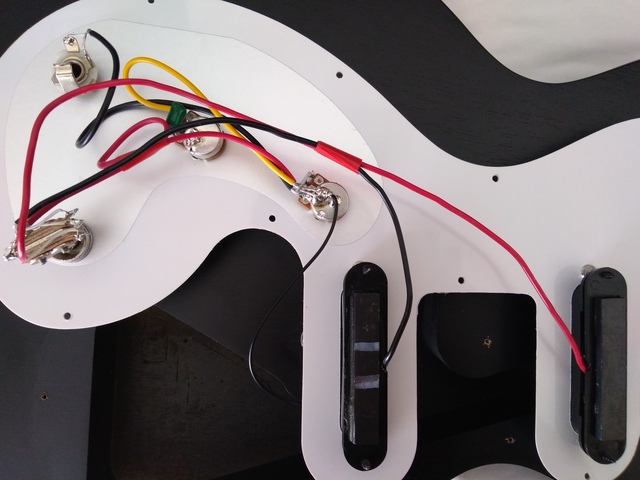 Check out the factory arrangement of my Les Paul SL.

I fixed the bridge pickup as shown above. To arrange cables connected with neck and bridge pickups, I wrapped red insulated tape. I also made a circle by a cable between the selector and the volume, which was touched to the output jack, and possibly making regeneration of noise. 8KHz noise seems to be reduced. I think the sense to avoid noise can be made by building a DIY radio receiver. 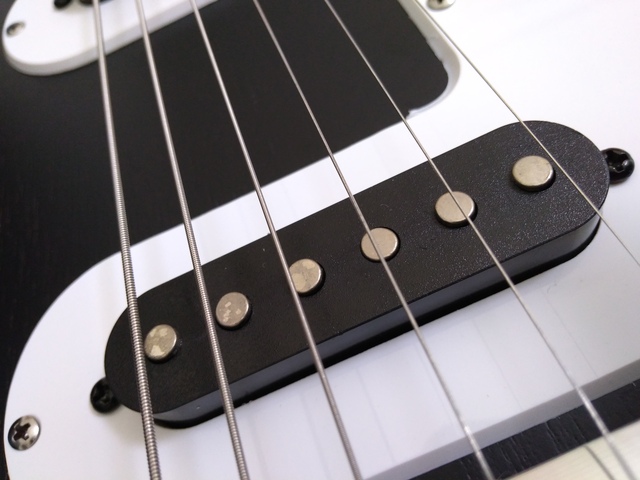 Hmm, let's get a demonstration...