So I'm planning to customize my Les Paul SL. 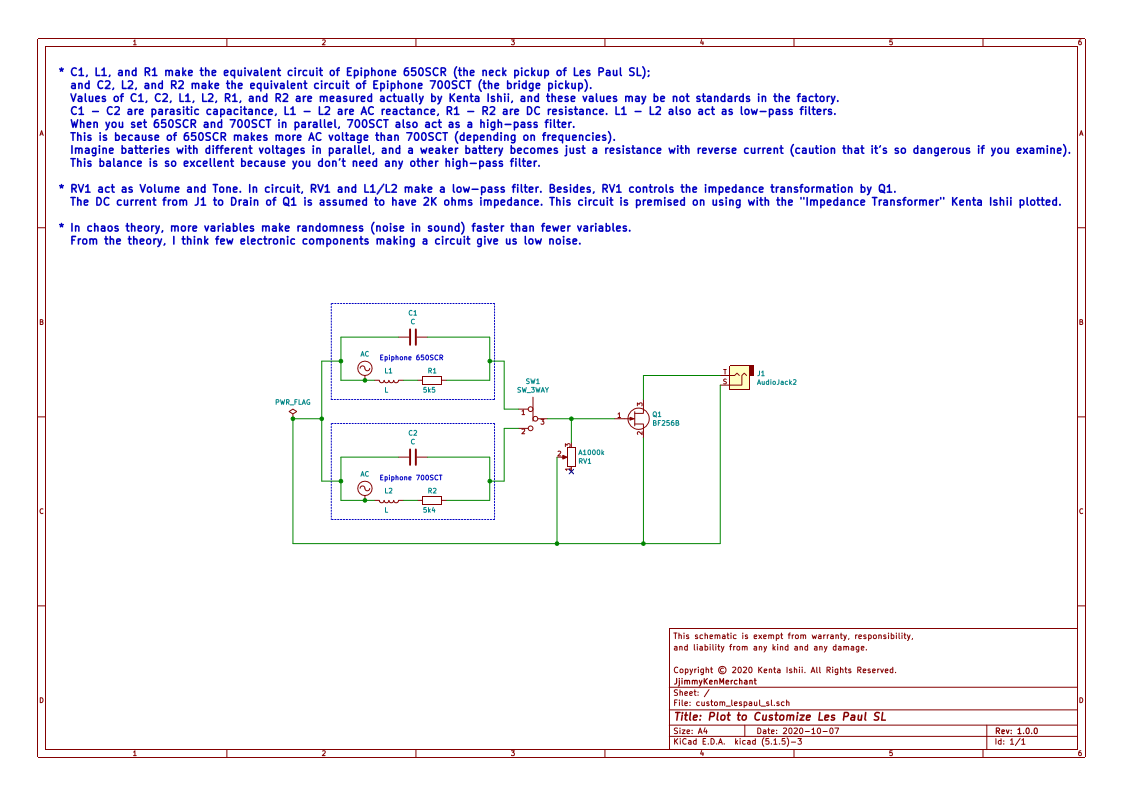 This customization is for direct connection with my DIY preamp by an ordinal guitar cable with phone jacks.

So, there are two issues.

1. BF256B is packaged in TO-92. The packaging is sometimes big to be implemented, however it's having stable characteristics. I'm searching one which is smaller than BF256B, but having the same characteristics. So far, I found out 2SK209-BL of TOSHIBA. Several JFETs purposed for electret condenser microphones (ECMs) have enough characteristics to be used in this plot. However, its zero-gate voltage drain current (Idss) should be 6.0mA to 14.0mA, and its forward transfer admittance (|Yfs|) should be between 4.0mS to 15.0mS (forward transconductance, gfs, in BF256B). High |Yfs| gives us large amplification of sound, but it may cause distortion.

* BF256B is JFET. You've probably learned that N-channel JFET can't be used with positive voltage at its Gate because of current flow. In a N-channel JFET, however, Gate to Drain/Source make a diode, and it doesn't break up its characteristic until incurring over approx. 0.6 volts. This fact gives us that JFET isn't needed to make voltage biased for Gate with small signal such as 0.1 volts at maximum. I searched on Internet and found out several descriptions that single coil pickups output 0.4 volts (0.8 Vp-p) on attacking, and 0.1 volts (0.2 Vp-p) on average. I guess testers probably pick all strings at the same time in examination. Tom's Guitar Project gives us a result in an actual test, showing approx. 0.15 (0.3 Vp-p) volts at maximum. I concluded that JFET doesn't distort its output as long as you use an ordinal single coil pickup. The reason of the conclusion is also come from these pickups' premise on usage with tube amps. Some type of tube amps acts like the JFET in my plot at its first phase, i.e., the first tube receives small signal without negative bias and distorts its output on receiving larger signal than expected. Note that N-channel JFET was invented as an alternative of triodes. I guess P-90 and humbuckers intentionally increase outputting power to get distortion in tube amps, but in this case, tubes may be broken. Anyway, characters of typical tubes in irregular situations are widely examined, and I haven't touch the earth so far.

* So, guitars with single coil pickups are considered to be used with buffers and boosters, and in this phase, the sound stays clean. Recent Fender pushes HSS Stratocaster which has a humbucker on its bridge. HSS is also produced by YAMAHA, naming as Pacifica. I don't know why Fender shows friendship with Pacific YAMAHA, but I also guess if players could change between different power sources, handle a volume knob, and foot pedals on the same time in their premium stages. This action is like ignorance of Jazzmaster which has a quick changer. Note that Pacifica series are just guitars with excellent qualities and used to be loved by musicians in recording studios.

2. In this planning, the POT for the tone knob is removed or become as a dummy. I'm considering of moving the POT for the volume knob to the place for the tone knob. If I do so, I can't do playing style like Stratocasters. Plus, by summing knobs for volume and tone at the same POT, I needed to learn the controlling method. Note that this simplification comes from chaos theory, i.e., the small amount of electronic parts make low noise rather than adding the parts. The evidence of this theory is linear feedback shift register (LFSR) that makes pseudo-random number. In other words, LFSR makes pseudo-noise, and it needs a complicated polynomial if you want realistic. I made a synthesizer by RasPi (codes on GitHub), and I added Digital LFO modulation which is under a chaotic complex nonlinear system. This modulation makes noise gradually through adding values for the modulation. I think this modulation is a demonstration of chaos theory. This theory give us how complex system takes difficulties in manufacturing. The POT with 1M ohms A type which has logarithmic curving is chosen to control volume, dialing 0 to a small number in 10. However, I'm going to use B type which has linear curving because of its cost of purchasing. I assume that the remaining resistance of an actual 1M ohms B type POT is up to 100 ohms, calculating -80dB at minimum volume. The curve of single coil pickups has the higher peak than humbucker's characteristic which is shown as double coil's impedance. According to Ishibashi Music's note about guitar electronics (Japanese Language), the impedance peak of a typical single coil pickup is around 566K ohms at 9.4Khz, whereas the peak of a typical humbucker is around 300K ohms at 7.2Khz. As I mentioned in the plot as shown above, the bridge pickup of Les Paul SL act not only as an oscillator, but also as a high-pass filter on using both pickups. This function can be made of resemble impedance curves, but different peaks between neck and bridge pickups. So, you can watch a modern setup for Telecaster that the neck pickup is a humbucker, and the bridge pickup is a single coil one which has high power. This balance gives us more power on using the neck or the bridge solely. On using both, however, the bridge one might not act as a high-pass filter.

* You wonder why I respect the balance so much in the Rock world here. The reason is Les Paul SL can be used as a lap steel guitar. I think its unique neck profile, 14" on its radius, is considered of playing slide guitar. I also guess the abbreviation, "SL", comes from "slide". The sound is so trebly and enough to fit with blues, country, and Hawaiian. I can say Les Paul SL should be made in Nashville.