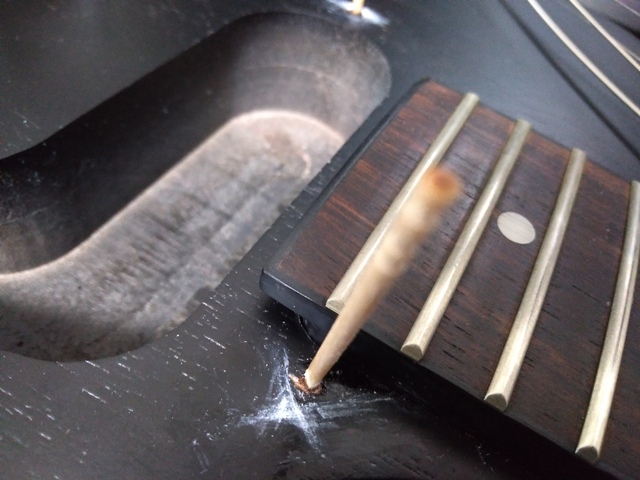 I re-drilled three holes for tapping screws that aren't fit with holes on the pickguard. To fill up holes, I used tooth picks which are made of white birch woods. I cut the tip of tooth picks and shaved its shape by a craft knife to fit with holes. I thought of using an epoxy glue, but I used a cyanoacrylate glue, i.e., super glue. Super glue is good, but whiten surfaces (leaving white residue). Note that cyanocrylate can be evaporate and whiten other surfaces the vapor is adhered. To remove white residue, I sanded surfaces by a #1000 waterproof paper and cleaned with Vaseline. If you have any furniture polish, it's good instead of Vaseline. However, several products prevent to whiten surfaces, and there are accelerators for super glues. 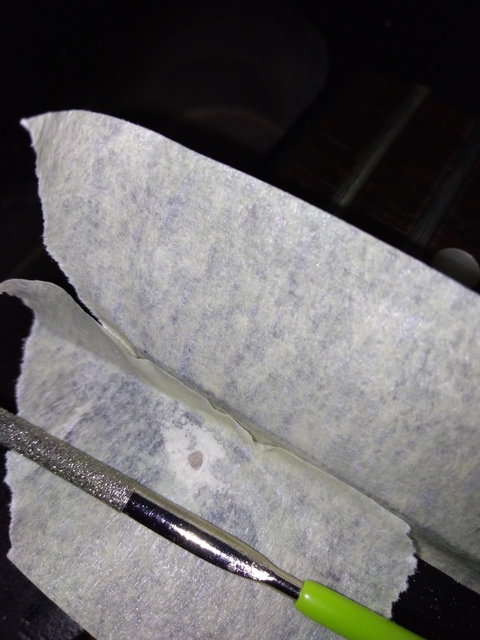 Super glue can be dried quickly. After 1-2 hours later, I cut woods and covered surfaces by painter's tape. Then I sanded the tipped wood to fit with the surface by a diamond coated file, a #400 sand paper, and a #1000 waterproof paper. Painter's tape on the tipped wood is removed by sanding. 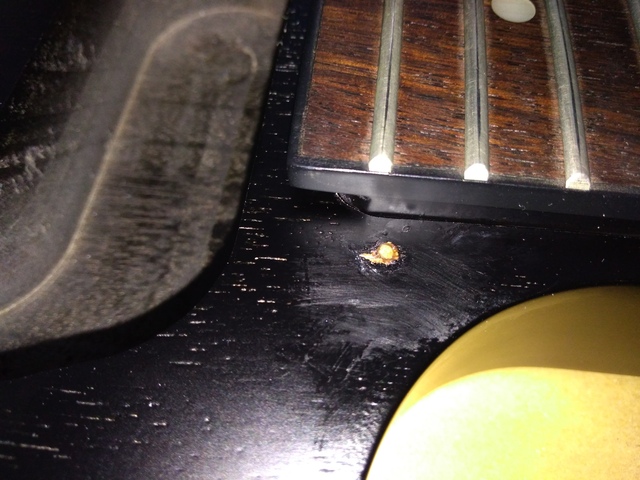 After sanding, super glue seems to filled the gap between the wood and the hole. However, using plenty of super glue whitens surfaces. Before re-drilling, I fastened the pickguard to the body using remained holes and screws to get correct positions to be re-drilled. 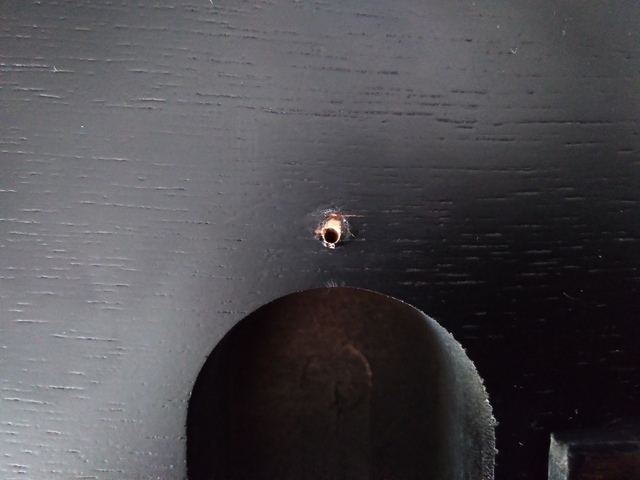 Let's re-drilling holes! First of all, I made a center point to guide drilling by an iron push pin. For make prepared holes, I used a 1.5mm pin vice. Note that 70 percents of the diameter of a screw is recommended for prepared holes on woods. Not to crack the body, I recommend that you make prepared holes correctly. The photo shown above demonstrates the uncovered body after making actual holes by inserting tapping screws. I cleaned wood shaving by a vacuum before taking the photo. By the way, wood shavings from the factory remained in holes of anchor bushings. My air blower blew shavings up! 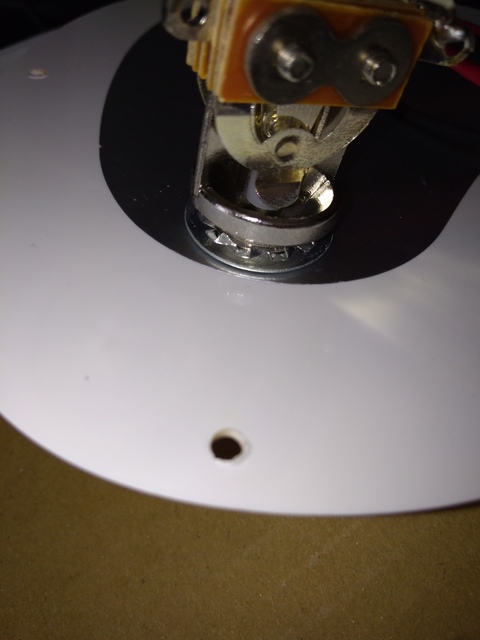 On checking the original short toggle switch of Les Paul SL, I found that two toothed washers are attached and the one bite the plastic pickguard. Toothed washers are used to bite coated metal for grounding on cars. However, the plastic is not a electrical conductor. Toothed washers can be act as spring washers to prevent loosening as long as teeth can bite hard surfaces. Therefore, I fixed placing of a washer, and removed another. Teeth bite the top of toggle switch where the metal is slightly rolled so that teeth can bite well. 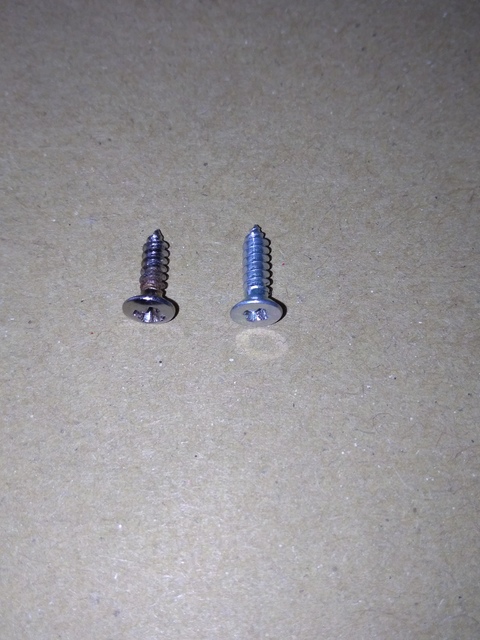 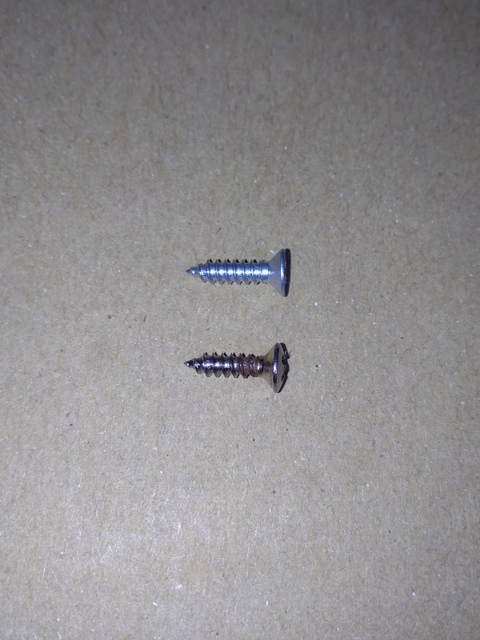 One of original tapping screws is rusted in playing (the left side and the lower side on the photos above). I bought a YAHATA 2.6mm * 10mm tapping screw which has Unichrome plating and a flat head (the right side and the upper side on the photos above). However, the original one seems to be 2.5mm * 9mm with an oval head. Both pitches of each thread seem to be the same 0.9mm. I found that only 2.6mm ones exist in JIS B 1007:2015 (ISO 1478:1999) Tapping Screws Thread. However, 2.5mm ones are also sold online, having less types than 2.6mm. I tried to insert 2.6mm one to a hole, but it's so tough as I feared of cracking. I also needed to make a correct prepared hole in length. 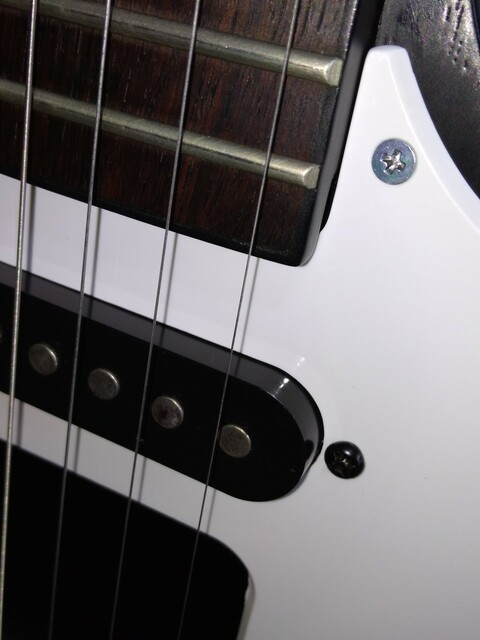