I unmounted the neck of Les Pauls SL from the body to improve jointing between the neck and the body. 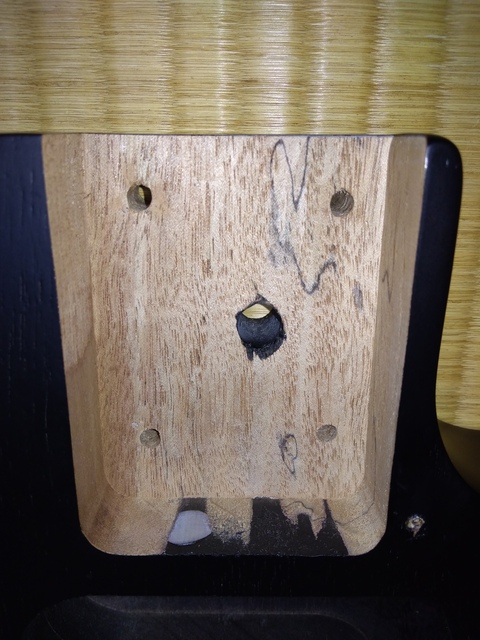 Epiphone says it's poplar wood, and I think "hmm". In a furniture shop, I found the similar pattern found in a tamo laminated wood. Tamo wood is a sort of ash woods. This rough pattern of vessels like ash woods brings me in a mystery. At least, it doesn't seem to be an alder wood. 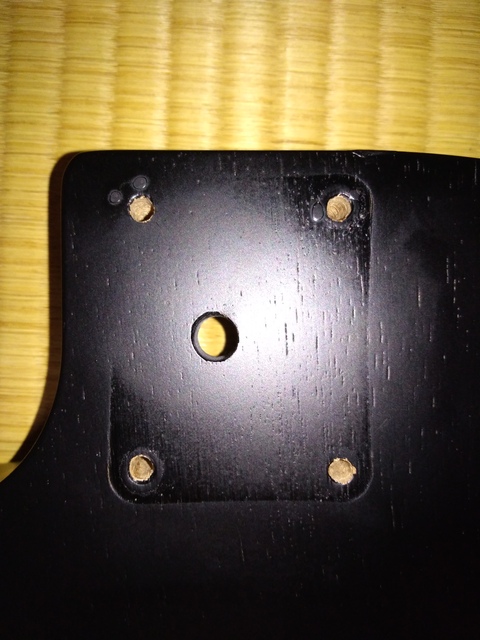 I widened body's four holes for bolting the neck to the body 3.5mm to 4.5mm by my hand drill with 4.5mm titanium bit. The wood screws are 3.5mm in diameter and 3.8mm in length. By widening these holes in the body, screws doesn't bite the body, and this modification helps to fasten between the neck and the body well. Furthermore, this modification also makes easy attachment between the neck and the body. However, if you do the same working for your expensive guitar, the tool should be a round file, and you should widen holes carefully. 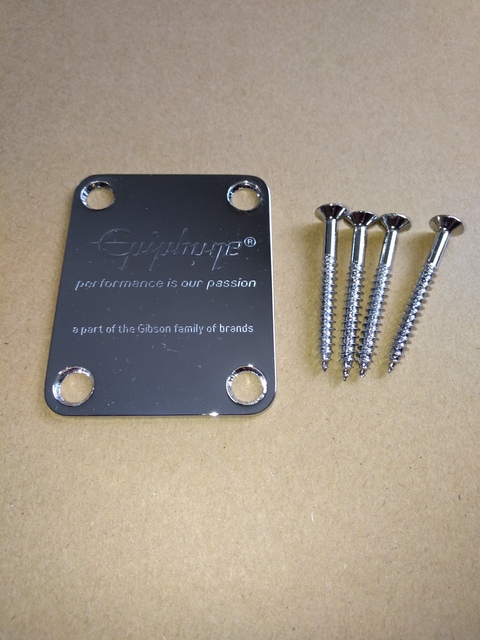 Plate and screws. The plate has the excellent Epiphone signature. 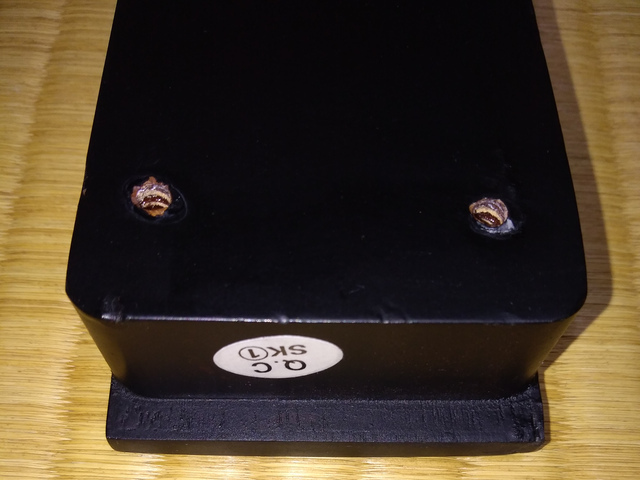 To strengthen tapping of neck's holes, as opposed to body's ones, I dropped a little super glue. I also cleaned edges of holes by sanding. For more details of this working, check out 8: Re-drilling Holes for Tapping Screws.

I think the plot of Les Paul SL is for the prototype of Melody Maker. Melody Maker is Gibson's electric guitar which is manufactured from the late 1950s. Melody Maker is originally attached standard sized single coil pickups, but not a pair of P90 pickups. In 1950s, Fender's guitars were popular, and Gibson's Les Paul was behind them. I think Gibson probably attempted to make many prototypes to surpass them. I guess Les Paul SL is one of these plots, and Melody Maker is replotting of Les Paul SL. Les Paul SL is made with bolt-on neck that is similar to Fender's guitars. Whereas, Melody Maker is made with set-in neck. Actually, bolt-on neck is difficult to keep intended tone and neck's condition adjusted in the factory rather than set-in neck, and Gibson's factory probably disliked such a "semi-finished" product. Anyway, in the 50s, electric guitars became popular instruments as having new invention and novel designs. If a manufacture made similar models to ones of others, it would trigger a legal problem. In 2010s, Apple and Samsung made lawsuits against each other because of smartphones, the new and novel products.

* When watched video to compare Epiphone Les Paul and Gibson Les Paul, I found that differences are not only tones, but also playabilities. I remember that, even these are the same models, the players seemed to feel of difficulty to play Epiphone Les Paul. I think this comes from the wrong adjustment of the neck. I think it would be easily adjusted by DIY, but as a player I hope that the factory adjustment should be perfect to play.

After remounting the neck to the body, I turned the truss rod to adjust its forward neck bow. The first day is around 90 degrees and over (it may be dangerous), and the second day is less than 45 degrees. This adjustment gives me approx. 2.1mm distance between 12th fret and 6th string. However few days later, with neck's squeaking several times, it becomes 2.6mm distance! But, I haven't adjusted more because of the hard winter which gives low temperature and low moisture, and the condition makes the neck become wrong. I think filing string slots of the nut should be the better strategy in this winter. 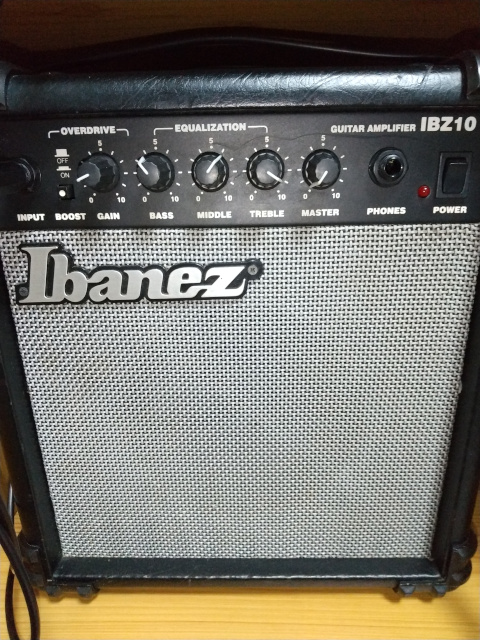 By the way, this is IBZ10 10 watts amp, my practice mate. I found that IBZ10 on 2000 Electric Guitar Catalog for USA. In Japanese 2000 Catalog, IBZ10 can be found in practice amplifiers. By pushing BOOST button, with any overdrive inline, the sound becomes the end of 20's century. As an acoustic amplifier, there is the noise that comes from the dynamic range of an op-amp. However as a preamp outlined from PHONES, there is no noise and gives the unique sound of Ibanez major lineups, Tone Blaster series. Note that IBZ3 10 watts amp is the real end-of-century practice amplifier in Japan. In that time, I played Yamaha's TC with a bridge humbucker plugging to VOX's tremolo amp, and practicing Deep Purple with natural sound (the "modern" suite was from Ochanomizu, the neighboring area of Akihabara, but I don't believe progressive Otaku people had sold the suite). Furthermore, another hobby had squashed my cash to buy an overdrive (guess the practical hobby even today).

It's my demonstration with IBZ10 pushing on BOOST button. Recording the sound from PHONE jack to UCA222, a DAC. Caution that the feedback in sustained tones is not from any pedal, and is just from IBZ10 itself. Using both neck and bridge pickups of Les Paul SL reduces hum noise because of reversed magnetic polarities.

It's the alternative ballad before Millennium. Stereo reverb is effected with Audacity. Ibanez had lunched a pedal called "L.A. Metal (LM7)", and the sound is similar to my boosted IBZ10. "L.A. Metal" shows the past "boomish" scene in some Spanish speaking country. In that days, street clubs demonstrated the scene, and MTV, a cable channel, was the TV tower. The smoothness of cultural things was definitely better than now. In brief, many music people had so-so bucks as opposed to the recent virtual world by "selected citizens with big some". Several critics may say "the scene had gone since it crossed over the red forest", but the scene has passed Anime-Otaku, and is now under the vintage renaissance. Some guitar shop that the video of L.A. Metal tutorial used to be streamed has transformed to a rural 60's restaurant. Ibanez is now pushing legacy TS808, and Tone Blaster becomes out. I know the technology of L.A. Metal is so higher, for example, its smooth volume and tone controls are no chattering ever in playing. However, the scene is now under such a big rule.

* These days (in late January 2021), the Spanish country is on the boom for day traders of investments according to SNS posts. I think they just reimburse their checks to ruler's purse with ASAP velocity. If I meet them, I ask them, keening on the looping repudiation, to purchase good guitars or furniture at least.

* This legal news from Reuters show the real of things in the rule. I don't blame them as betrayals because I don't have any political opinion. However, I want to point out that their resumes just show as professionals. Besides, the rule just use them as material pieces, even though southern ones may let them put on sovereign uniforms. The lesson of this news is just the knowledge that the rule is so heartlessly cold.