What did I do for E blues in more than 6 months from the funky previous post? It's my achievement sharing with you.

* I made this PDF file in LibreOffice Calc on Ubuntu because of open-source typefaces (fonts). LibreOffice on Windows may embed propriety fonts in PDF files. I think that licenses of Microsoft fonts have complexity on usage freely.

Here are 5 blocks of the major pentatonic in the E key.

The meanings of symbols: 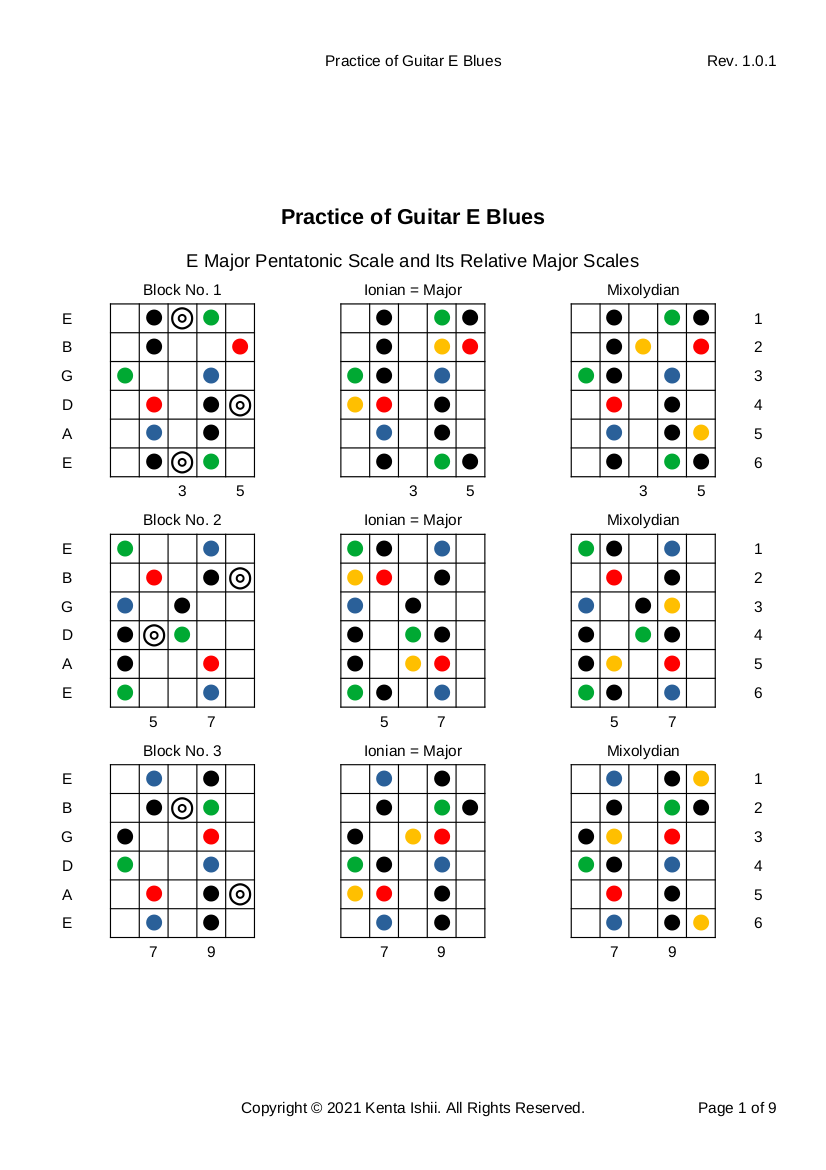 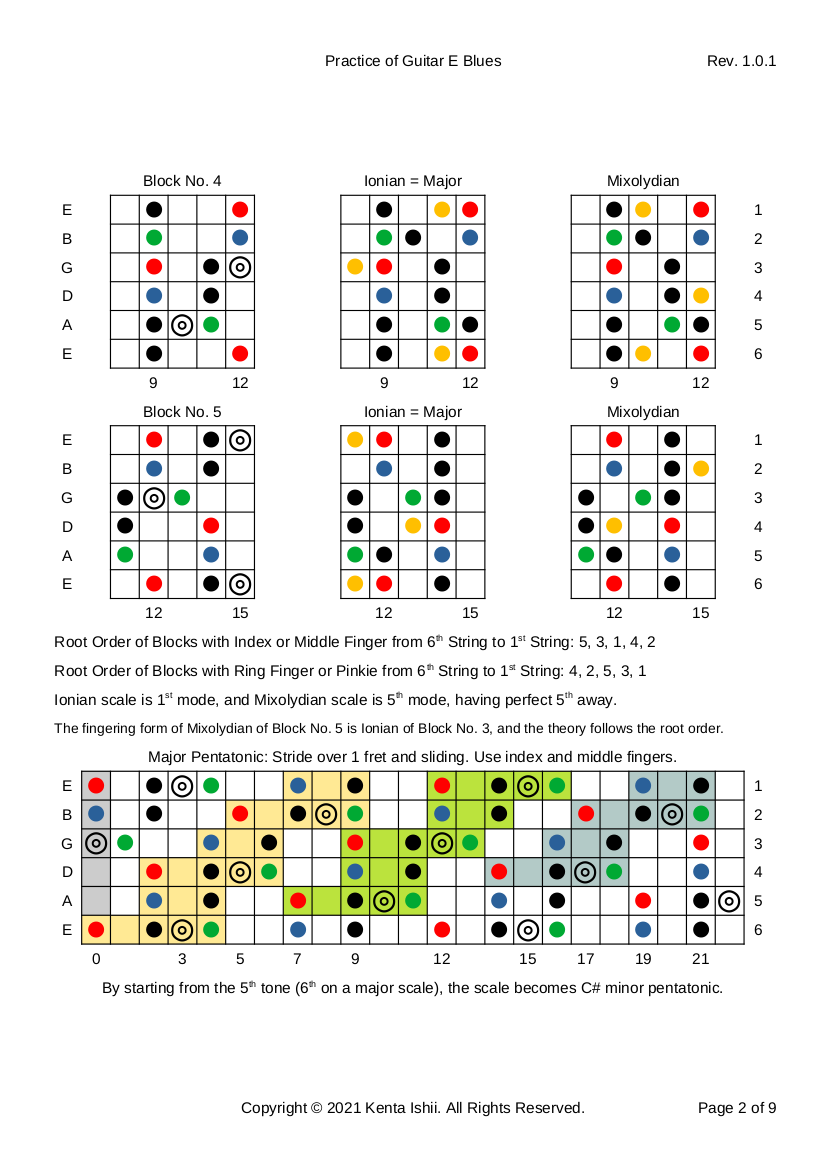 Many guitarists think that the block No. 4 of the major pentatonic is popular. I'd like to say "Yes" and "No". 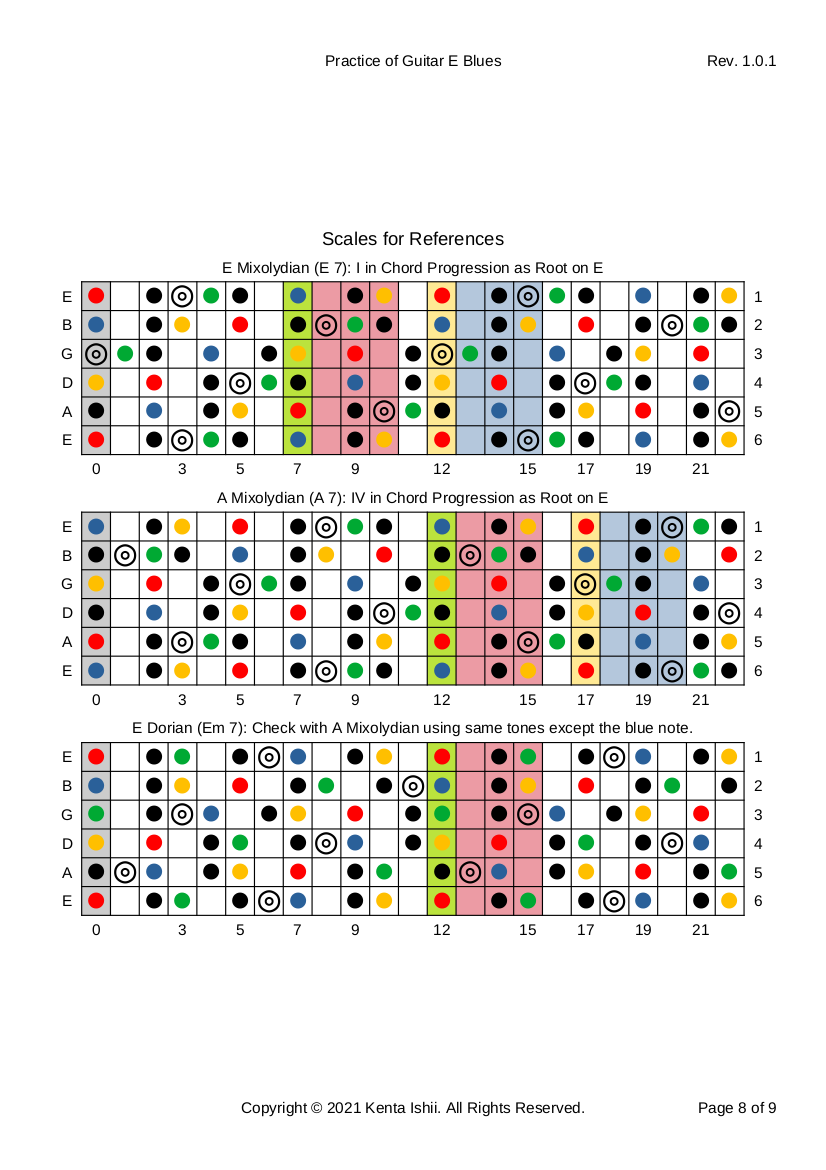 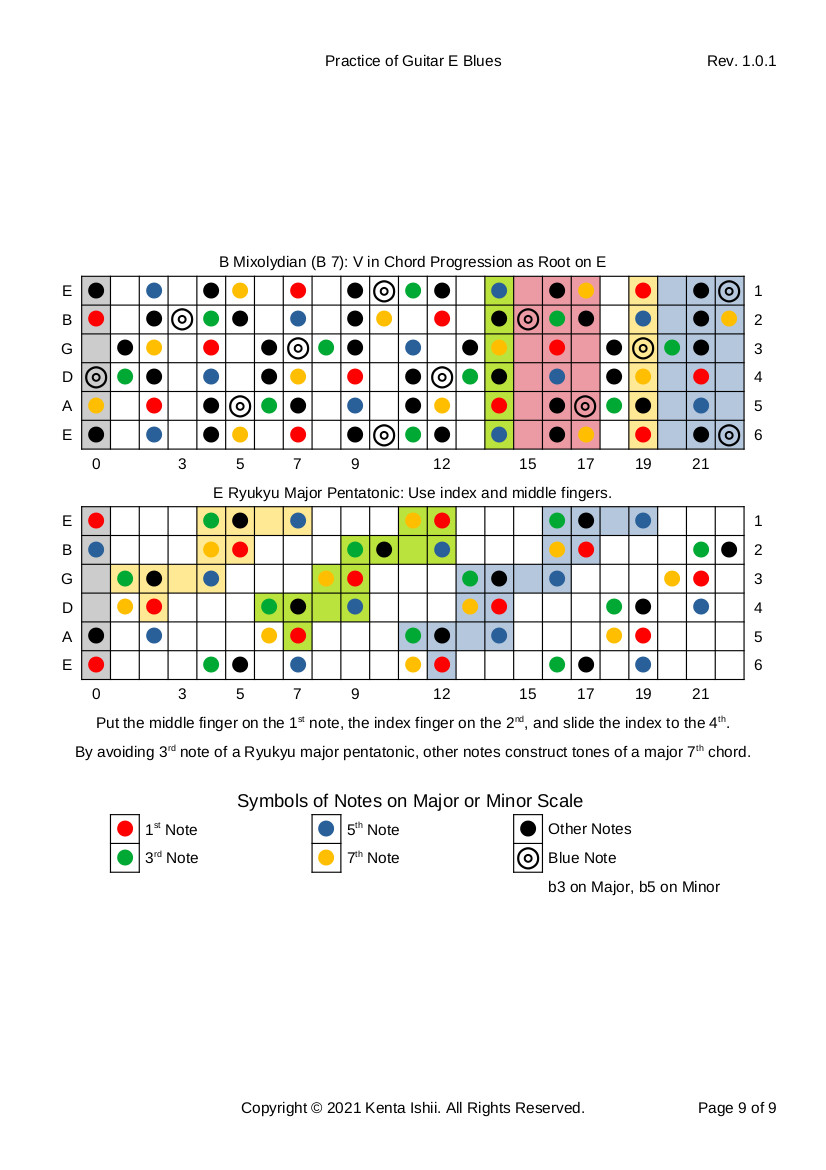 I don't recommend that you learn all scales and pentatonics in all blocks. If you are a live performer, don't learn all scales at your house, but jog around the club at the daytime, and join with people to take pictures. However, in learning all blocks, you can see that each block has a unique character, and you can make many phrases by connecting positions and changing blocks. The scale on the bottom of the page 2 of 9 shows how to slide positions. For example, the sliding technique starting from the 2nd fret of the 4th (D) string along with the yellow area reaches to the block No. 5. Besides, after going down the block No. 5, you can start the sliding technique on the green area from the 7th fret of the 5th (A) string.

* In Japan, these days, the storm of the gender equality blows politicians and Media. Basically, it's self-criticism by politicians for "forgiveness" from the world, and I think it's should be done and people should just take a smile on their faces. I don't say my gender online. However, some neighbor cat told a story. The cat was a singer, and one day, he thought to become a professional one. He contacted a teacher, and the teacher said, "male singers, like you, have been less demanding." The cat felt of such a wonderful world, and put a microphone on his last stage. As a supplemental explanation by humanistic me, professional singers have no genre, and have to sing all songs, that is, male singers just have less stages than female singers. However, recent female singers are in trouble because they needed to sing in higher keys than ever. Singing in higher keys reduces the life as singers because listeners recognize them as singers with high keys who need toughness more than listeners think. The cat chatted aloud, "listeners doesn't want a singer like Joni Mitchell, but just order to sing up to the limit." "But, I remember," the cat said, "teacher's eyes were apparently shifty, and eyes of other people afterwards used to be fixed icily." The cat bent his neck and meow, "I could choose to remain as a singer at that time, but my voice is 'beow' rather than 'meow', isn't it?" Meanwhile, my dog was a store stuff to make a smile to customers. When the dog became a smiling leader, the dog needed to apologize the "failure" to all female stuffs. All right, the world around me is just wonderful.

* "Both Sides, Now" released in 1969 by Joni Mitchell is the folk song beloved by baby boomers. 1969 was the time when baby boomers had started to have their own assets, and said goodbye to their adolescence. You can hear the origin, and see how the song is on liberty. It's actually the song for the age. I think the difference between them at that days and the recent age is "quickness" to purchase their houses after starting to make assets. So, why do recent people admit to show their smaller houses than ones of baby boomers in the future?